The seventh (annual) meeting of representatives of mosques (in Japan) was held in Waseda University.

Representative of Masjid Nagoya attended the (above) seventh meeting of representatives of Masjids.
Under the title “Planning the young Muslims’ future” there was discussed how the Muslims’ children, including the second generation, would face their employment and marriage (problems).
The presentations given by 3 young Muslims were splendid role models to refer to, because they were experiences of success gained after going through even a conflict between Japanese values and being a Muslim. Also, with every report presented by areas’ mosques there was a significant discussion about the role that the mosque performs towards the problems which young Muslims face. 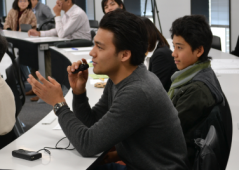 ※ The over all report (of the meeting) is shown on the home page of Organization of Islamic area studies in Waseda University.
Here is the link for interested people