Including Imam, 11 Muslims from Masjid Nagoya attended Hajj (pilgrimage) of 2014 between Wednesday 24th of September and Tuesday 14th of October.
Although there are many spiritual and physical (laborious) things to experience in Hajj, this time Alhamdulillah and thanks to the (good) arrangements of the tour company, which was Mian International from Tokyo, we managed to finish all stages without hindrance.

Japanese Muslims who joined Hajj this year were 13 persons, 8 of which were from Masjid Nagoya.
We are grateful to the grace of Allah who bestowed a lot of blessings upon us.

Below are some selections of the impressions which we received from Masjid Nagoya’s attendee; 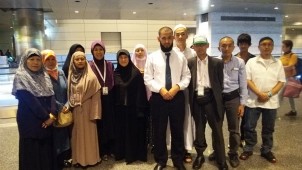