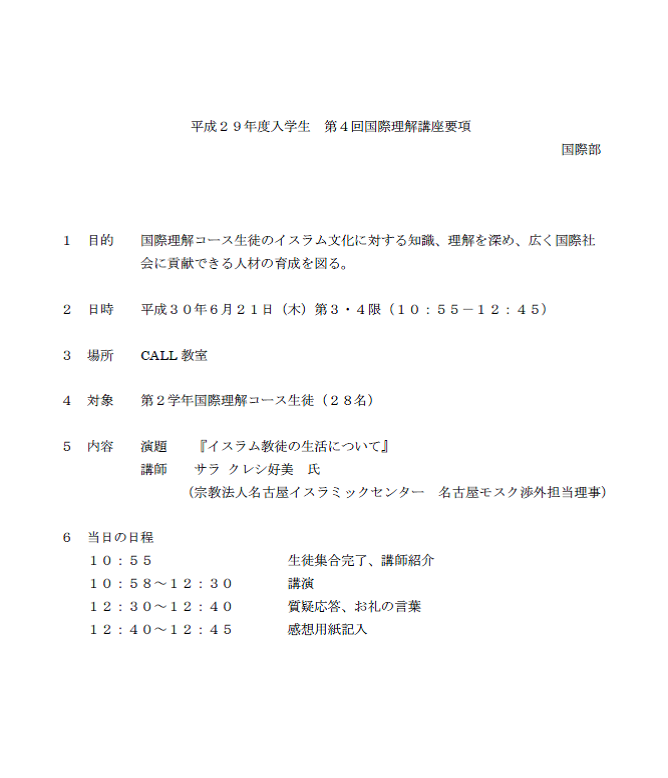 Comments:
・My image of Islam changed a 180 degrees after listening to the lecture. I never really knew about Islam, so I had a huge misunderstanding that it is a restricting and dangerous religion. But after listening to the lecture, I felt ashamed that I carried a prejudice without knowing anything. Islam has such an amazing worldview, and I felt that it teaches an ideal situation of how the world really should be. I hope the world becomes a fair and kind place, just like what Islam teaches.

・There are 2 things I learnt from todays talk. First, our understanding regarding how Muslims live their lives were absolutely incorrect. Honestly, I had an image of it being restricting and difficult, but after listening to the talk, I was able to realize that this is completely false. In fact, I actually felt like I want to try out the Muslim lifestyle. Secondly, I learnt that I have to spread what I learnt today. I feel that many Japanese do not know the reality, and so if they learn, I think the prejudice against their surrounding Muslims would disappear, and there would be people who grow an interest in Islam just like me.

・To be honest, until listening to the talk today, I didn’t know much about Islam, and had a little bit of an image of ISIS as well. But after the talk, I realized that for me to think this wat was such a rude thing to do. Islam values peace and fairness, and I now have an extremely positive image regarding this religion. I am so glad I was able to listen to the talk today. At the same time, I realized that not knowing something is such a dangerous thing, There might be people in Japan who have prejudice against Islam without knowing much about it. I wish to tell them what I learnt today. 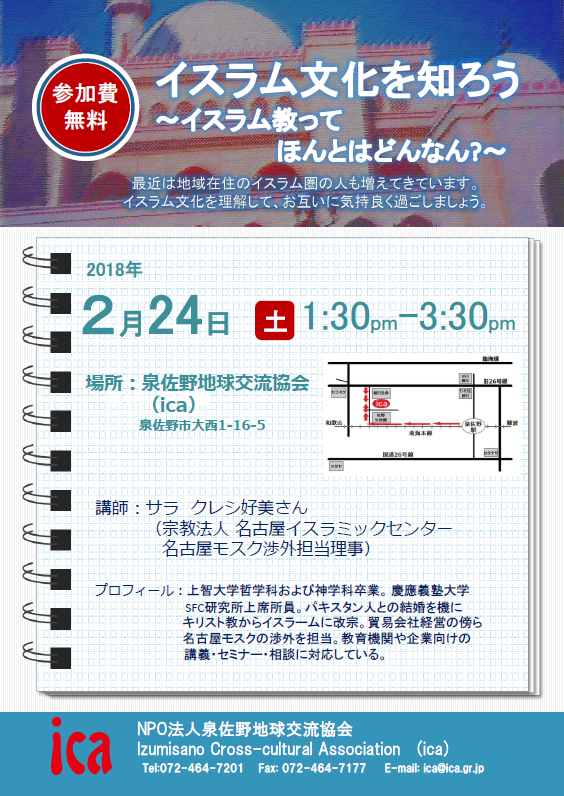 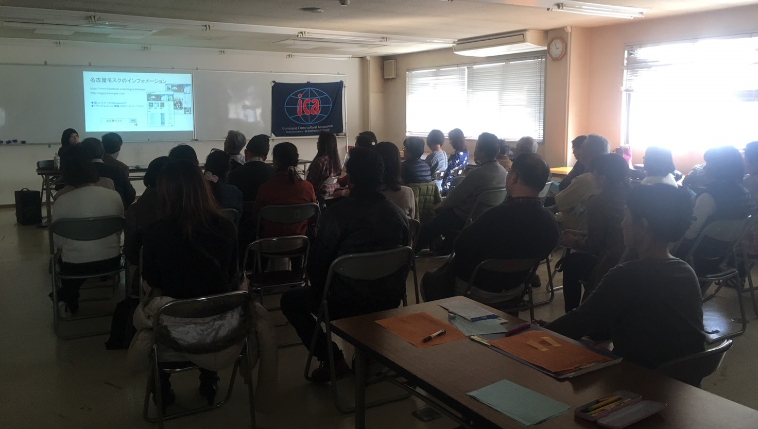 Comments
・The speaker has a clear understanding of Islam outline. Her explanation was simple and easy to understand by any Japanese audience. She teached every aspects about Islam including the negative publicity surrounding it. Islam is a peaceful religion. Few doubts about Islam was made clear by the speaker. Thank you very much.
・The Islam I learnt today was absolutely different from the Islam I knew of. I was not only surprised, but also ashamed of myself for not knowing the true Islam. I find the stubborn stance of the media extremely troubling. Listening to today’s talk was extremely valuable for me. My image of the media has now changed.
・I have never had the opportunity or the place to ever learn about Islam before. I had a sense of “fear” towards something I did not know. But after listening to today’s talk and gaining knowledge, now my image toward “Islam” is different
・I felt that, even Ramadan and the prayers are actually something flexible. I did not know that Islam values peace, and that it is the middle path. I also did not know that women are respected. I learnt that IS and Islam is something completely different. I feel that maybe it is not possible to know the truth until we study various news and events from different perspectives. 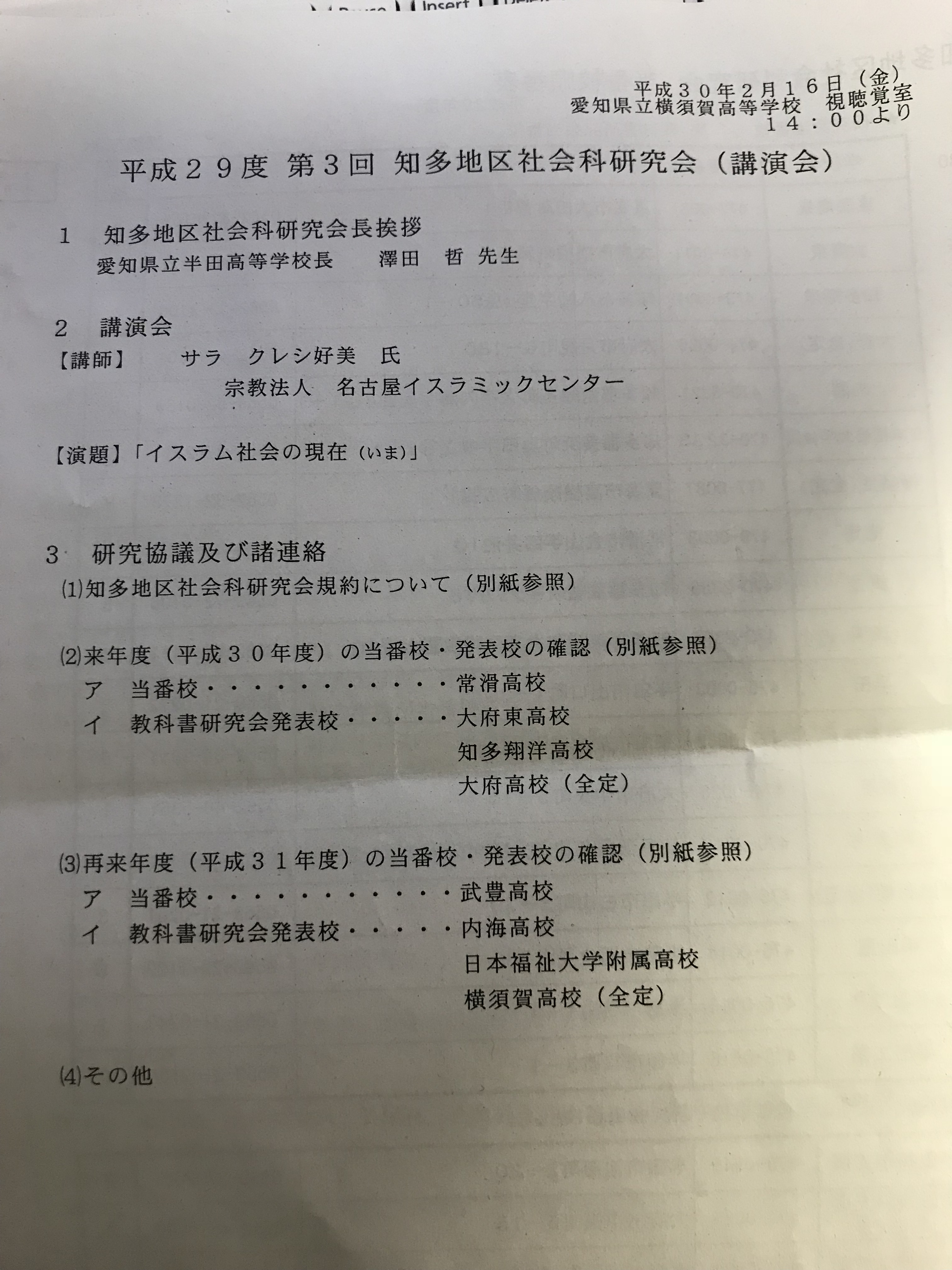 Comments
・People of the same age as me are being called a “terrorist”. It struck me when I heard this, because I myself associated Islam with terrorism a little bit and had a bad image of it. However, after listening to the talk today, I feel Islam is a nice religion. And it is sad, that even though it is a nice religion, there are people bullied because of the terrorists.
・Many people think that all Muslims are extremists. I used to think this way too. But I felt ashamed of myself when I watched the video and heard the voices of the Muslims in Japan. I learnt that Islam is a tolerant religion. The pilgrimage is only once in a lifetime, and not all Muslims follow the Hadiths the same way. […] It was an amazing opportunity today. I hope that Muslims can live at ease.
・At the beginning, my image of Islam was that it is a harsh religion full of rules and regulations. But I was surprised to know that Islam is flexible, taking different peoples circumstances into account, and that the Hijab is actually to prevent mistakes and problems before it happens. I feel it is wrong to view someone in one way just because they are Muslim, so from now on, I want to use what I learnt today to tell other people about this, and I hope that there will be a much deeper understanding of Islam in Japan as well.
・I thought Ramadhan was something extremely tough, but it actually seemed pretty fun, after knowing that there’s like a party in the night. I also understood that it is an event where fasting encourages one to give the Zakaat properly. […] By listening to the talk, my knowledge and thoughts about Islam changed. It made me feel that looking at things from different angles wll indeed change what you used to think before as a fact.

Comments
・Before listening to today’s talk, “Islam = IS” was what I thought, and I actually didn’t really have such a good image towards it. But now that I know the IS is only a small minority, and after also understanding the meanings behind the Islamic lifestyle and actions, I now have an extremely nice image of Islam. I want to actually talk with and get to know Muslims. […] I want to spread what I learnt today, so that more people will understand Islam properly.
・If I hadn’t come to the School of International Liberal Studies, and never had the opportunity to listen to today’s talk and learn about religion, I would have probably thought Islam = IS. It is scary that people that know nothing about Islam are being moved left and right by the media and criticizing it.
・I thought I knew about Islam a bit because I am a part of a university club that supports education in Bangladesh. But listening to today’s talk made me realize there was so much that I still did not know. What struck me the most was when the speaker said, “when they are shown understanding, it allows them to appreciate and approve themselves”. I used to think Muslims were “people that live in Japan, but are a very different and distant group from me”. However, I realized today that apart from their belief in Islam, they are the exact same human beings just like us.
・I knew close to nothing about Muslims, and I, just like the public, only thought of it as a religion that the extremists are a part of. But after listening to today’s talk, I realized that I actually agreed with a lot of the way Muslims think, and I am now very interested in it. […] I hope that more and more people will know about Muslims, and show interest in them. I want to go to the Masjid in Nagoya too!! 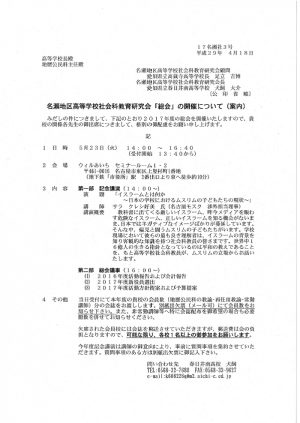 Comments
・I understood the differences between Islam, Christianity, and Judaism very well.
・The concept of time in the monotheistic religions made sense to me.
・The two keywords, fairness and tolerance changed my image of Islam.
・It was really hurtful to hear the situations Muslim children in Japan are in. 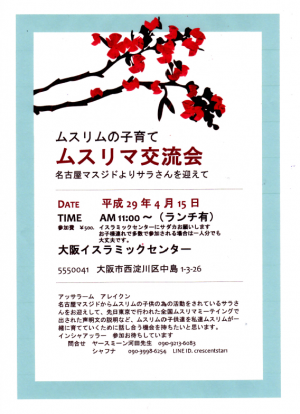 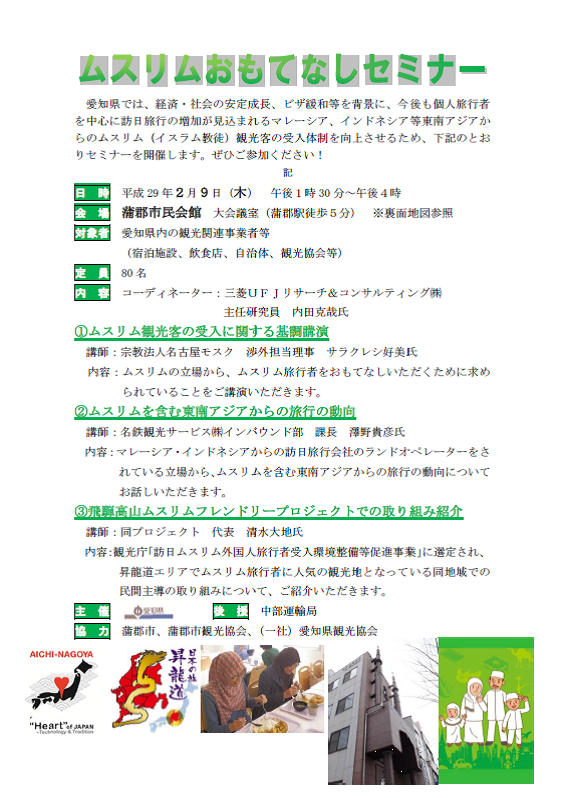 From the impressions
 It was very easy to understand because the kind explanation we received was well balanced between speech of Islamic rules and the practical corresponding method.
 By hearing the fresh voice of a Muslim and his real opinion, my way of thinking changed 180°.
 It was informative because we were able to learn the basic idea. I have felt that the information available around is raising the hurdles too much.
 Knowing comes first. I feel it is necessary to correspond without being misled nor being seized by the (fear of) word “Halal”. 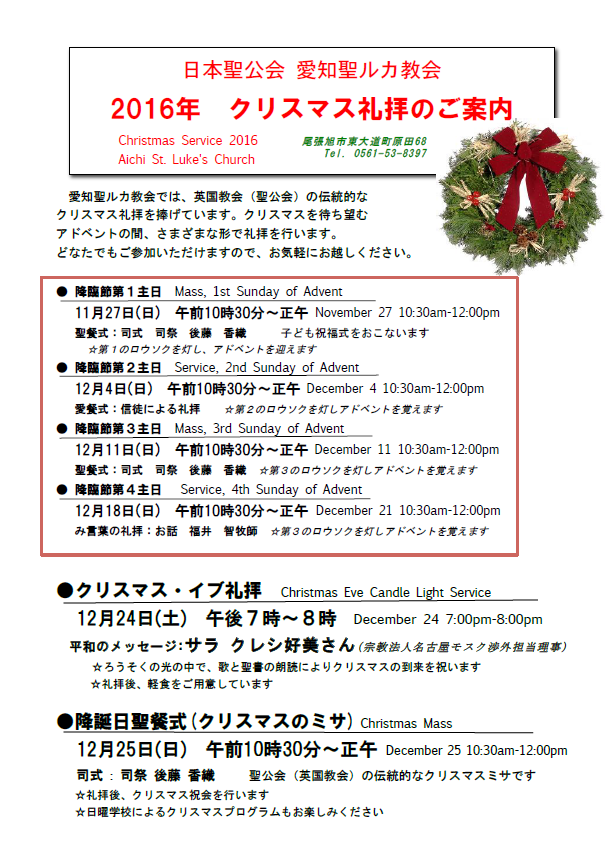 From the impressions
I realized (after this lecture) how poor my own knowledge about Islam was. Even though I intend to have awareness as neutrally as possible, I have the feeling that I am influenced again by the impression received from the media and I feel I must consider my correspondence in administration from now on.
Since news of IS (started), I was satisfied with the media’s information only and I didn’t decide to know myself, while the difference between “Islam” and “Islam State” has remained ambiguous. (omission)/ From now on, when there is a biased or discriminative topic I want to tell the contents of (today’s) study.
I have understood that ignorance leads to prejudice. I think even I myself had some ambiguous anxiety towards Islam. I realized that first it is important to understand rightly.
I had an image that Muslims have a stern way of life; however after I learnt (today) about some specific aspects of their daily life, such as timing of the prayers, I was able to understand rightly. I felt very pitiful for the present situation of (Muslim) students who are harassed at schools as a result of prejudice. I want to correspond positively in administration.

From the impressions:
-We received an easy-to-understand explanation about the basic viewpoints of Islam. I have admired that Islam is a gentle religion which is seeking peace.
-I feel angry towards the afflicted situation of Muslims because of the unfounded bias, in spite of the fact that it is based on such gentle thoughts.
-My understanding of Islam and Muslims has become deeper. I came to feel that, while respecting the religion and identity of each other and in order to be able to become friends, it is important to know first.
-I will be glad if I am able to help well in popularizing grass root the struggle of her children to protect their dignity.

From the impressions:
 We received an easy-to-understand explanation about the basic viewpoints of Islam. I have admired that Islam is a gentle religion which is seeking peace.
 I feel angry towards the afflicted situation of Muslims because of the unfounded bias, in spite of the fact that it is based on such gentle thoughts.
 My understanding of Islam and Muslims has become deeper. I came to feel that, while respecting the religion and identity of each other and in order to be able to become friends, it is important to know first.
 I will be glad if I am able to help well in popularizing grass root the struggle of her children to protect their dignity. 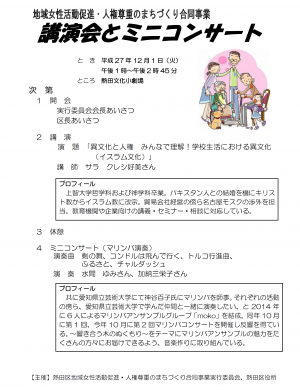 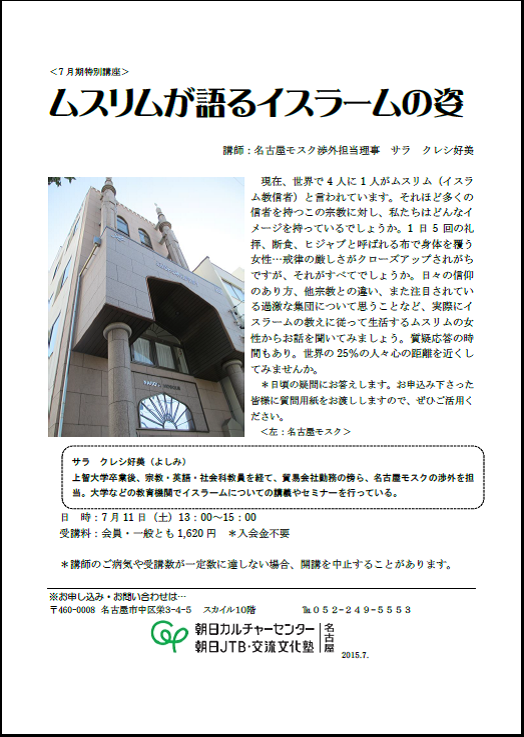 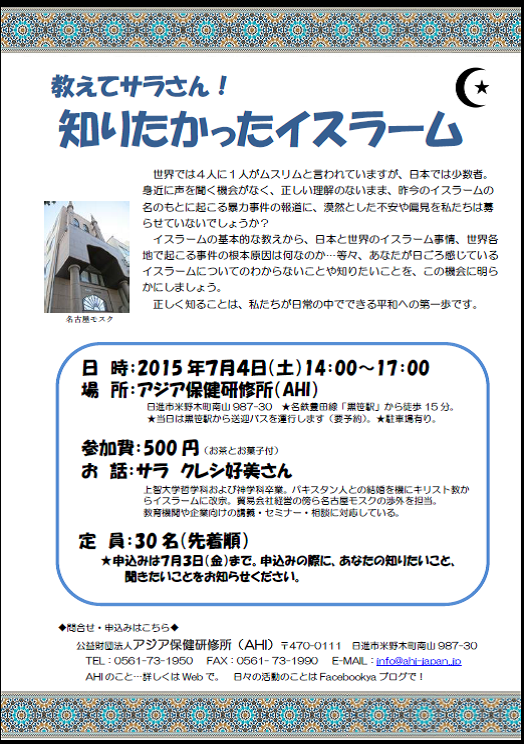 2015.7.4 Muslim Student Association in Japan
「Dawa in Japan (Past, Present, Future) and the role of youth」 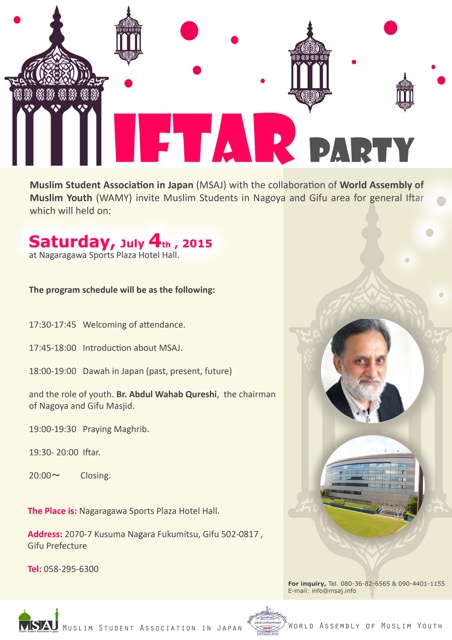 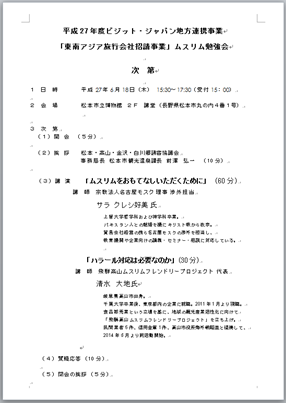 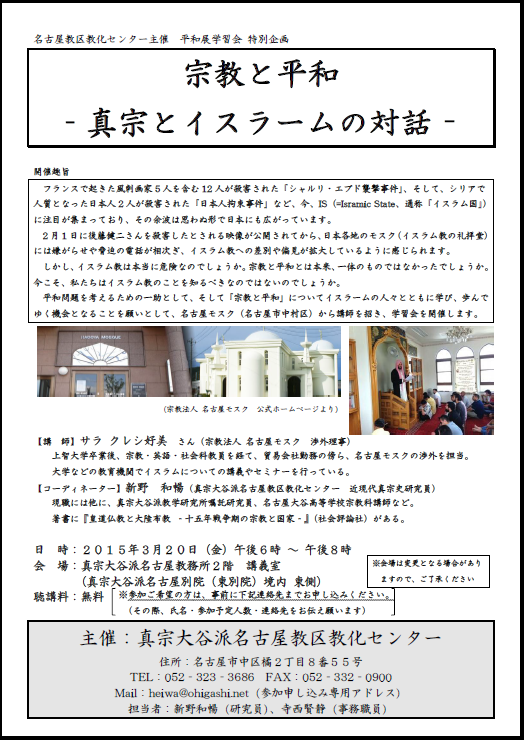 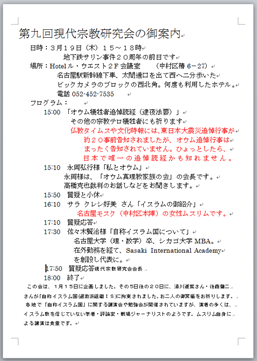 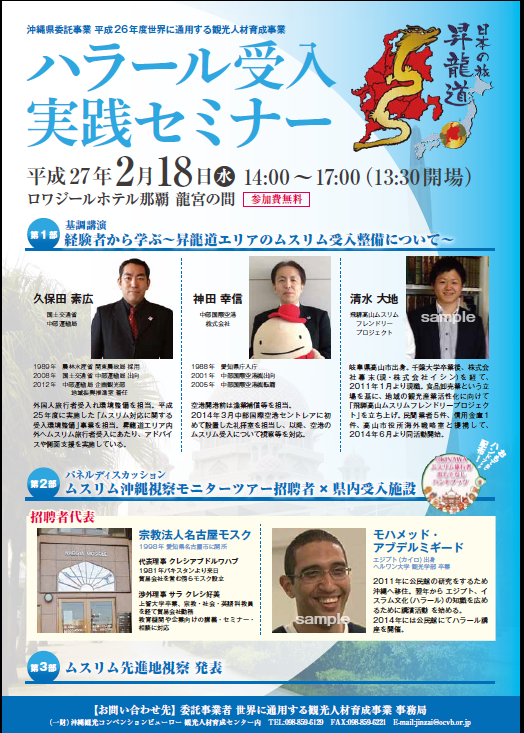 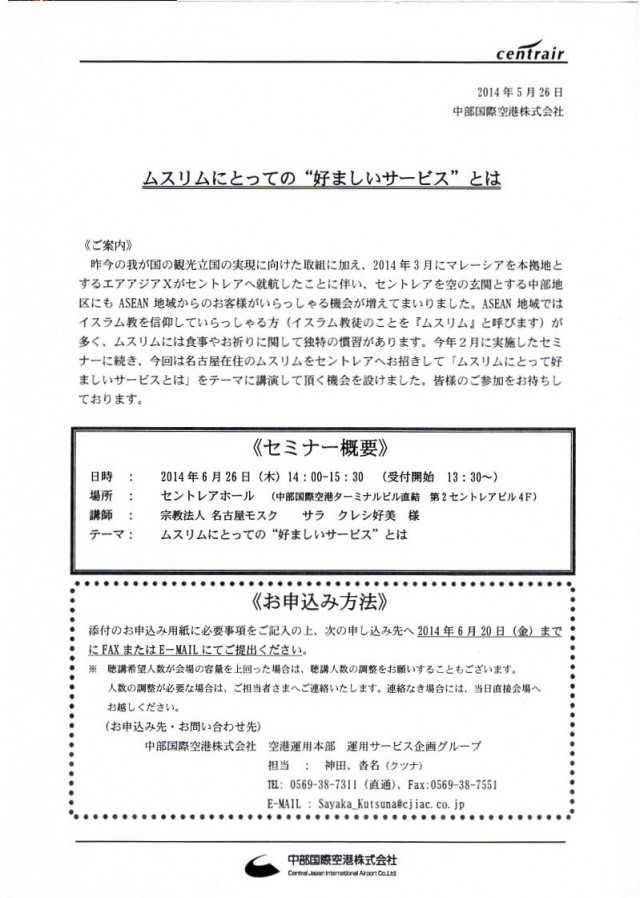 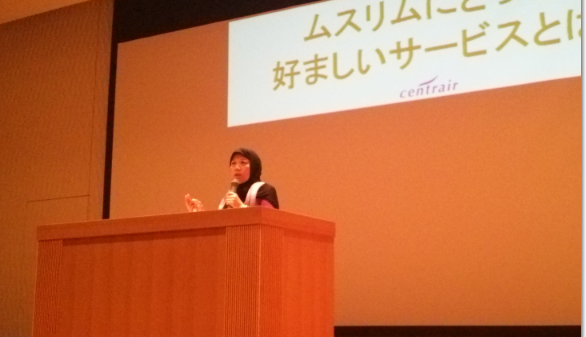