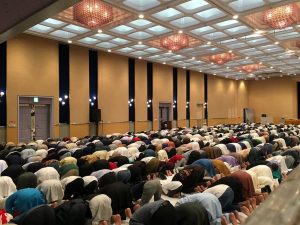 Speeches were given before the prayer, first by 9 elementary and middle-school children. They got up to present what they have learnt regarding the Prophet(saw), along with a Hadith empathizing the importance of being kind to others. A Japanese Muslim then talked about research results conducted recently by the Masjid on how some converts experience discomfort in the Masjid because of the actions of fellow Muslims. The next speech was given by another Japanese Muslim about how he was blessed with helpful brothers that supported his life after conversion. May we be among those from the latter, realizing it is often more beneficial to patiently treat our new Japanese brothers and sisters, rather than forcing them to take in too much at once.

The Khutbah after prayer was delivered by the Imam in Arabic, English, and also Japanese. Citing a verse from the 94th Chapter of the Quran, “Indeed, with hardship [will be] ease”, he reminded us that Allah can test us with what we love, but indeed ease is to come.

As on every other Eid, the Masjid provided snacks and treats for the small children after prayer. May Allah reward abundantly the young Muslims that helped out.