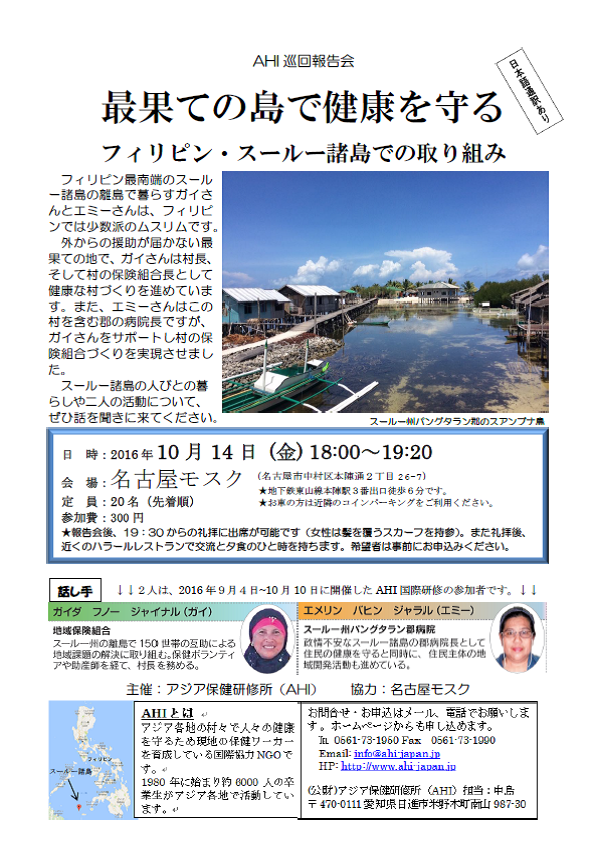 In the Philippines, more than 90% of the population is Christians.  However, in Southern part of the country, there is the region called the Autonomous Region of Muslim Mindanao (ARMM) where Muslims, the minority in the Philippines, are living.
Ms. Gaida Hunnoh Jainal（Gai） and Ms. Emelyn Bahjin Jalan（Emy) are from Sulu Archipelago, a part of ARMM, the southernmost islands of the Philippines.  They will tell you how the people’s lives are there and how they are struggling to improve people’s lives and protect their health.
Gai is the President of Suang Bunah Health Care Financing Association (Piso Mula sa Puso, PMP) that consists of the heads of 150 households as its members.  She is working for the improvement of village people’s living.
In Sulu Archipelago where is politically instable and even NGOs can’t work, Emy is working as the chief of Pangutaran District Hospital.  Not only her work in the hospital, but she works in the villages to promote the participatory area development with people.